What to Do if You’re Bitten by a Blacklegged Tick

Additional resources are available from the CDC and the VDH about how to remove attached ticks. The New York Department of Health created this video about proper tick removal.

1. REMOVE THE TICK
If it’s still on you, carefully remove it.  Avoid squeezing the tick’s body which can push disease causing bacteria into your body.  Instead, pull from as close to your skin as possible.

Do NOT use petroleum jelly, matches, nail polish, glue, or other products to smother the tick! These methods are less effective, and may make it more likely the tick regurgitates harmful bacteria into your body.

2. IDENTIFY THE TICK
The tick to be most concerned about is the blacklegged tick (also known as the deer tick). Approximately 60% of blacklegged ticks in Vermont are infected with a disease-causing pathogen. Other ticks may also transmit disease including the Lone Star Tick, American Dog Tick, and Brown Dog Tick.

3. YOU MAY SAVE THE TICK FOR FURTHER TESTING
There are differing opinions about whether to have a tick tested for pathogens after it is removed from your body. The VDH and CDC discourage using results from these tests to guide decisions about treatment because even if a tick contains a germ, it does not mean that you have been infected. Also, a negative results can be misleading because you might have been bitten unknowingly by a different, infected tick.

Some Vermonters choose to have the tick tested immediately, or to save the tick in a plastic bag in a freezer (labeled with the date and location the tick was found and removed). If symptoms of a tickborne disease arise, testing the tick is possible when more information is needed.

4. NOTE THE AMOUNT OF TIME YOU THINK THE TICK WAS ATTACHED
The longer the tick was embedded the higher probability it will transmit an infection.  However, a tick does not have to be embedded for 24 – 36 hours to transmit disease. Some TBDs can be transmitted in less than 24 hours, or (rarely but possible) in as little as 15 minutes.

5. WATCH FOR SYMPTOMS OF A TICKBORNE ILLNESS
During the early stages of Lyme disease a blood test will often remain negative while a person develops enough antibodies to be detected by the test. This means watching for signs and symptoms of illness is extremely important, because that is how Lyme and other tickborne diseases may be diagnosed in early stages when treatment is most effective.

The CDC says “During the first few weeks of infection, such as when a patient has an erythema migrans rash, the test is expected to be negative.” The CDC also notes that “Some people who receive antibiotics early in disease (within the first few weeks after tick bite) ….may only develop an antibody response at levels too low to be detected by the test.” meaning prophylactic treatment or early treatment for symptoms may result in a negative blood test, even if you are infected.

Symptoms from a tickborne infection often occur three days to 30 days after a tick bite. Symptoms of disseminated Lyme disease can occur days, months, or years after infection.

Symptoms of a TBD may include a fever, headache, “bulls-eye rash”, or joint pain. Other symptoms can include cognitive changes, gastrointestinal problems, vision changes, or insomnia. Sometimes a tickborne illness presents as a mental health disorder such as anxiety, OCD, or Depression.

6. TALK TO YOUR HEALTH CARE PROVIDER ABOUT TREATMENT OPTIONS
Because early treatment (often this may be before a blood test is positive) results in better outcomes for most TBD patients, it is important to speak to your health care provider about your treatment options as soon as symptoms start.

Some providers may recommend a full course of antibiotics when a patient from an endemic area removes an engorged tick. Other physicians may prescribe prophylactic antibiotics, although some are concerned about the limited research behind this recommendation. Some Vermonters wait to see if symptoms occur (it is important to remember that symptom onset of some TBDs may be delayed weeks, months, or years after a tick bite).

7. REMEMBER, YOU MAY NEVER SEE A TICK AND STILL CONTRACT A TICKBORNE DISEASE
Vermont is considered an endemic state for Lyme disease. According to the CDC “because tick bites are not painful, many people will not remember a tick bite” so Vermonters and their health care providers should be aware of the variety of signs and symptoms related to tickborne diseases.

NOTE: With Lyme Disease, the Incidence of a “Bulls-Eye” Rash is Decreasing in Vermont
Many Vermonters are familiar with the “Bulls-Eye” or “erythema migrans” rash as a symptom of Lyme disease. Health care providers in Vermont should be aware that the Vermont Department of Health surveillance shows that the incidence of these rashes is decreasing in confirmed cases of Lyme disease. 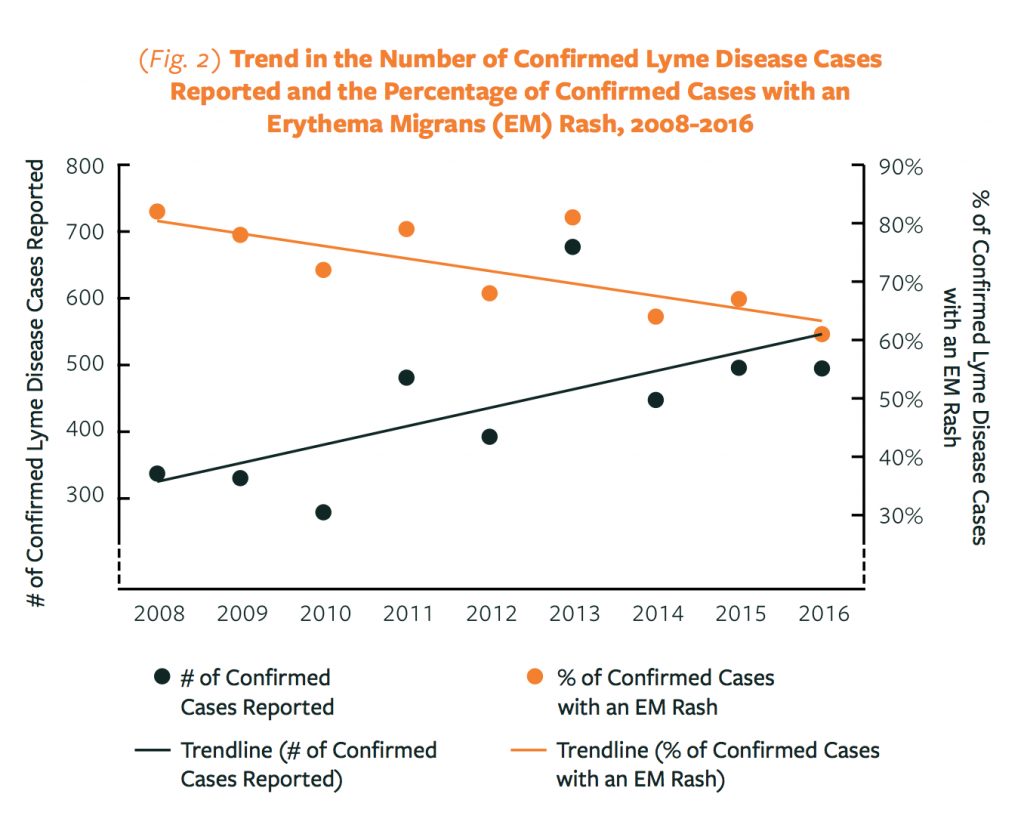 The VT Agency of Agriculture’s Passive Tick Surveillance Program offers free identification of ticks, and monitors the distribution of ticks in the state of Vermont and tick identification images (This program does not test for pathogens)

This guide from the CDC also has images for tick identification

Tick Testing Resources
Ticknology offers a universal tick test for $25-$45. See their tick submission guidelines for how to send a tick to Ticknology

TickCheck offers testing from $49-$200. Specific test information is on their online order form

Tests for Lyme disease are not always accurate

Because of the way Borrelia burgdorferi (Bb) act within the body, antibodies may not always be present in the bloodstream. People with late-stage, disseminated Lyme disease may test negative. According to the CDC, testing an infected person too early can produce a negative result. False positive tests occur, and accurate tests for other tickborne infections present in Vermont are not always available.

According to the CDC, a diagnosis of Lyme disease can be based on symptoms, history of exposure to ticks in an endemic area, and lab tests when indicated. A negative blood test for Lyme disease does not always mean you are free from infection. If you have signs and symptoms of Lyme disease you may be infected, even if a blood test is negative. It is also possible to contract a tickborne disease that will not show up on a test specific to Lyme disease. In Vermont, these most often include Anaplasmosis and Babesiosis.

Not Everyone Gets a “Bulls-Eye” Rash

Estimates from the CDC show one in four people who have Lyme disease do not see a rash. In a 2014 survey of confirmed Lyme cases in Vermont, a rash occurred in only 50% of pediatric Lyme infections. The absence of a rash does not always mean you don’t have Lyme disease. A person may also have a different tickborne disease that does not present with a rash.