According to the CDC, Vermont has the second-highest 3-year incidence rate of Lyme disease in the United States and is considered an ‘endemic state’. When Lyme and other tickborne diseases are accurately diagnosed and properly treated patients often recover completely. However, some Vermonters have experienced long-term health problems even after completing standard treatment.

After spring and early summer in Vermont, tick activity peaks again in October and November coinciding with hunting season when many Vermonters are out in the backcountry. While diagnosis of Lyme disease is highest in the spring and summer, Anaplasmosis rates in Vermont peak during late autumn. Tickborne diseases are diagnosed all 12 months of the year in Vermont. 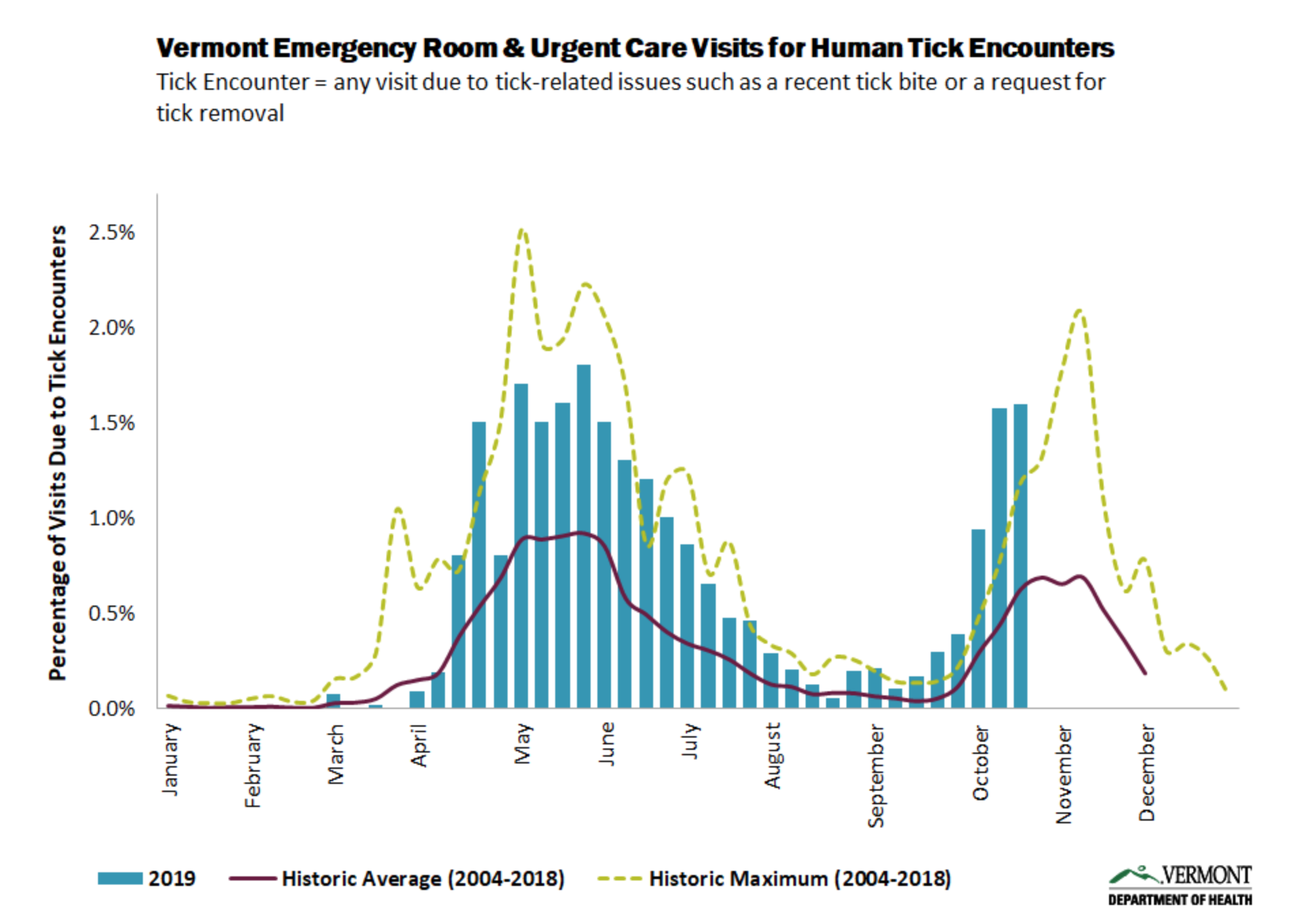 Vermont’s children are at high risk for tickborne diseases. These can affect their health, learning abilities, social interactions, and overall development. Children with a complex tickborne illness can have symptoms that may not be understood by teachers, caregivers, friends or physicians.

Disagreements among medical researchers and physicians about the diagnosis and treatment of Lyme disease, combined with difficulty accessing medical professionals in Vermont with expertise in treating tickborne illnesses, can make the experience of a complex tickborne infection difficult for Vermonters.

Some Vermonters struggle with ongoing health problems after contracting a tickborne disease. Those who were healthy before their illness can find it challenging to change their lifestyle or resume regular activities. Other Vermonters become unemployed or isolated when they are too ill to work, go to school, or participate in community and social activities.

One study by the National Institutes of Health (NIH) revealed the quality of life for people with complex Lyme disease can be like that of patients with type 2 Diabetes or a recent heart attack. The study concluded “There is considerable impairment of health-related quality of life among patients with persistent symptoms despite previous antibiotic treatment for acute Lyme disease.”

With approximately 60% of blacklegged ticks in Vermont testing positive for a tickborne disease, Vermonters are at high risk. You can help fellow Vermonters. Learn more about ways you can support friends, neighbors and community members affected by Lyme and other tickborne diseases. 10 Things to Know About People with Lyme Disease.

Vermont is 2nd in the USA for 3-year average incidence of Lyme disease, with more than double the rate of other endemic states.

Many people do not realize that Vermont’s incidence rate for Lyme disease is significantly higher than many neighboring states.

These incidence rates are based on CDC “confirmed cases” of Lyme disease.

These statistics do not include “probable cases” or undiagnosed/unreported cases, so the CDC estimates the actual Lyme disease incidence rate is 10x higher than listed in the official CDC tables.

These include Anaplasmosis, Ehrlichiosis, Babesiosis, Powassan Virus, and a recently discovered species Borrelia miyamotoi. These tick-borne diseases are not included in the CDC surveillance data on Lyme disease. These are often called co-infections, although they may be present without Lyme disease. Some of these tickborne infections require different treatment than Lyme disease.